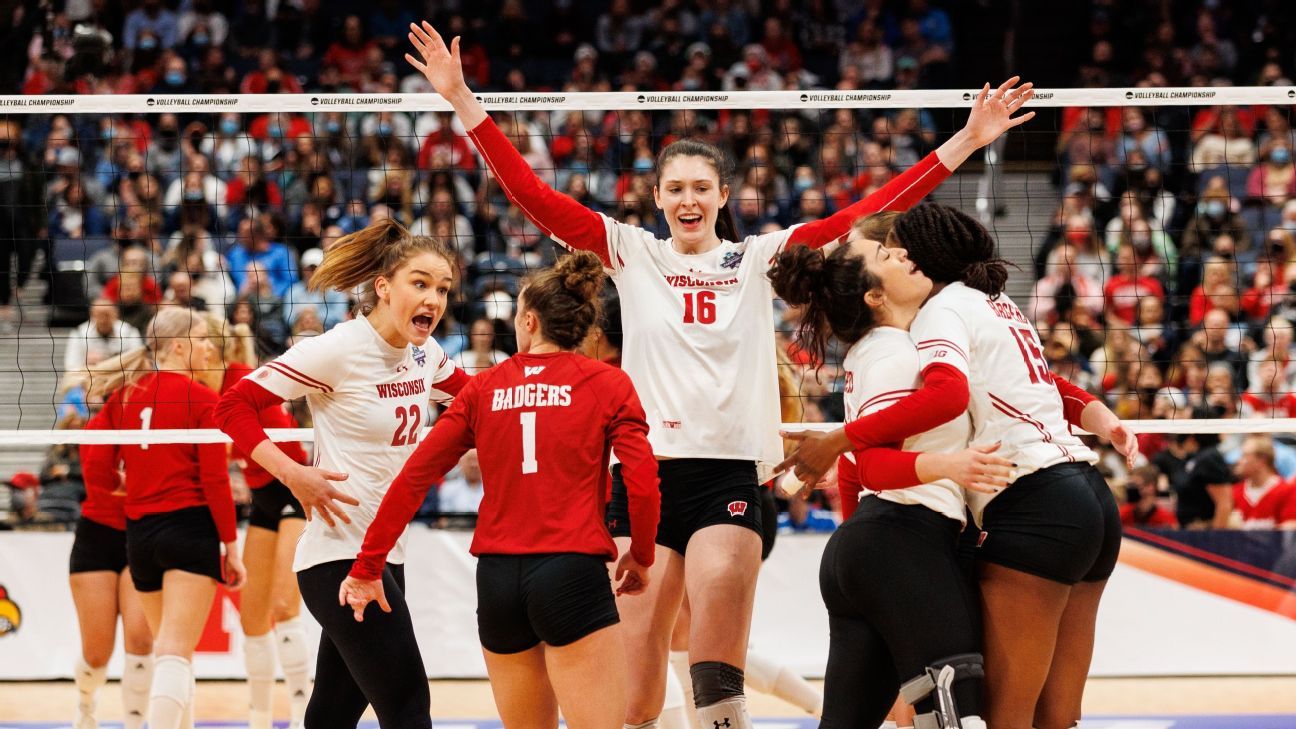 COLUMBUS, Ohio — Down 1-0 and with the second set not looking good, it appeared this would be another heartbreak NCAA tournament for Wisconsin.

But led by national player of the year Dana Rettke, who came back for a fifth season in hopes of the Badgers at last celebrating the final point of a year, Wisconsin rallied. The Badgers are no longer the best women’s volleyball program never to win the national championship.

They shed that unwanted tag Saturday in a 3-2 victory over Big Ten rival Nebraska, which was going for its sixth national championship. Wisconsin celebrated the winning point twice.

First, it appeared Nebraska hit long in the fifth set to make it a 15-11 Wisconsin victory. The Badgers dogpiled joyously, but had to get up and compose themselves to keep playing after Nebraska successfully challenged that there was a Wisconsin touch on the ball.

“During the challenge, we kind of just kept making eye contact with each other,” Wisconsin libero Lauren Barnes said. “Saying, ‘All right, if this doesn’t go our way, we’re still playing volleyball. We haven’t done anything yet. The game isn’t over.'” Instead, the match ended poetically with a Rettke kill at 15-12.

The first Badger player to ever be national player of the year, Rettke finished the match with 11 kills and career-record-tying 13 blocks. Her last kill at Wisconsin brought the long-awaited NCAA title. This was Wisconsin’s fifth trip to the final four and fourth championship match. The Badgers previously had lost in the final to Nebraska in 2000, to Penn State in 2013 and to Stanford in 2019.

Last season, with the NCAA tournament played in the spring because of the COVID-19 pandemic, the Badgers were the No. 1 seed and unbeaten heading into the final four, but were swept by Texas in the semifinals.

Rettke, a 6-foot-8 middle blocker, and fellow seniors Barnes, Sydney Hilley and Grace Loberg had to decide if they would come back for a fifth season enabled by the blanket eligibility waiver provided student-athletes because of the pandemic. They all returned.

Wisconsin lost another senior, middle blocker Danielle Hart, to an ACL injury in September. But there was also a key freshman addition in middle blocker Anna Smrek, who at 6-9 gave Wisconsin another tower at the net and provided Rettke a rare teammate: someone taller than she is.

Rettke talked about how proud she was of Smrek after the rookie’s big match Thursday in a five-set victory over No. 1 seed Louisville. Smrek is the daughter of former NBA player Mike Smrek, a 7-foot center who won championships with the Lakers in 1987 and 1988. Saturday, Smrek had 14 kills and seven blocks and was named the final four’s most outstanding player.

“She’s a phenomenal player,” Rettke said of Smrek. “She has some really awesome gifts.”

“That was definitely an epic battle,” Rettke, who finished the set with a kill and two solo blocks. “Really good volleyball, so back and forth. That doesn’t happen unless every single person believes we can win that set. And we pulled it out with some clean volleyball.” They took the third set 25-23, but Nebraska won the fourth set 25-23, with the NCAA championship record crowd of 18,755 at Nationwide Arena roaring.

That set up the 11th five-set match for the national championship since the NCAA volleyball tournament began in 1981. Nebraska also lost the last five-setter, to Stanford in 2018.

The Badgers program dates to 1974, but it took its first big step forward when coach Steve Lowe took over in 1986. The Badgers were NIT champions in 1989. Then they went 29-7 and made their first NCAA tournament appearance in 1990, getting to the Sweet 16. But in July 1991, Lowe suddenly fell ill. A nonsmoker, he was diagnosed with lung cancer and died in August at age 35, just as the season was starting.

In a haze of grief and disbelief, the Badgers went 23-10 under interim coach Margie Fitzpatrick and again made the Sweet 16. John Cook was hired in 1992, and spent seven seasons there before returning to Nebraska, where he took over in 2000. The Badgers met their former coach in the 2000 NCAA final, losing 3-2 to the Huskers.

They had success for the first nine years of coach Pete Waite’s tenure that lasted from 1999 to 2012, but Wisconsin didn’t make the NCAA tournament in his last five seasons. He was replaced in 2013 by Kelly Sheffield, who led the Badgers to the NCAA final in his first season behind star freshman Lauren Carlini. Her career ended painfully in 2016, when the Badgers lost a 2-0 lead at home to Stanford and fell in the Elite Eight.

But the next season brought in the talented Rettke. No one could have envisioned then a scenario in which she would get to play five seasons at Wisconsin, but that’s what happened.

“She’s had a special career,” Sheffield said. “She found ways to get better every year. She’s an incredible teammate. She’s one of those rare breeds of superstar player that carries herself with confidence but has unbelievable humility to her.”

It was an outstanding season for Nebraska, which made its 10th national championship match. But the Huskers couldn’t overcome a Badgers team that beat them twice in the regular season.

‘); })(); ]]> Score Some Big Funding Every year thousands of high school football players dream of scoring a full ride scholarship to college. Football scholarships are some of the most lucrative, and most coveted, financial aid opportunities available. They are also extremely competitive, and only the most exceptional players will have a chance at…

Players have support from their coach, former North Dakota State head coach Chris Klieman, who tweeted that he wants to “help every player unite for the solution NOW, so that that we can come together stronger than ever.” Continue reading from the Source