A world without college sports not only affects fans — it also creates a financial domino effect from the NCAA down to athletic departments across the country.

NCAA schools receive a certain amount of money each year to aid their programs in recruiting and other expenses. The governing body planned on distributing $600 million to its Division I schools, according to the NCAA 2020 Division I Revenue Distribution Plan. But since the COVID-19 pandemic forced the organization to cancel March Madness and the remainder of spring athletic events, the NCAA will now only distribute $225 million to Division I conferences and schools.

The original revenue distribution plan had $600 million that was to go to certain departments: the Equal Conference Fund, Basketball Performance Fund, Sports Sponsorship Fund, Grants-in-Aid Fund, Academic Enhancement Fund, Academic Performance Fund, Conference Grants, Special Assistance Fund and the Student Athlete Opportunity Fund. These funds each tailor to a specific part of how athletic departments function and how the NCAA runs its organization. 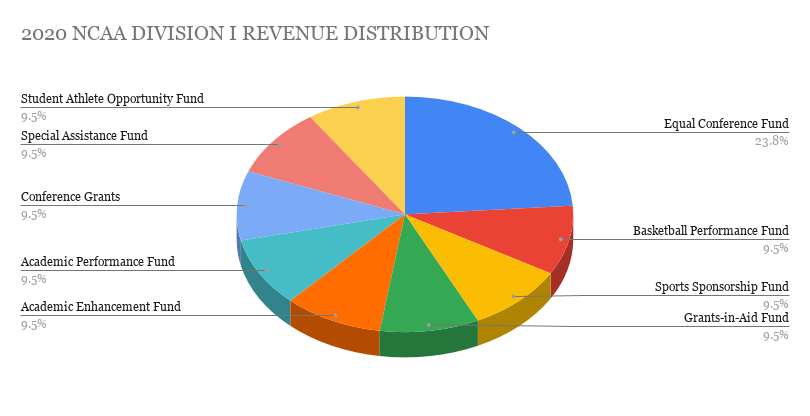 Many of these funds, such as the Student Athlete Opportunity Fund, also directly aid student athletes. This fund provides “direct benefits to student-athletes or their families” as determined by the conference and NCAA guidelines, according to George Washington University’s fund page.

Now with significantly less money to work with, the Division I Board of Governors decided that $53.6 million of the $225 million will be distributed equally through the Equal Conference Fund. The fund will be split equally among Division I basketball conferences that are eligible for the NCAA tournament, according to The Athletic. The remaining money will be divided up and sent to the remaining funds.

This revenue cut could potentially affect Division I athletic departments in a few ways, such as cutting down on staff or freezing salaries. The University of Indiana already took precautionary measures by halting non-essential building and maintenance projects as well as putting a freeze on new hiring, promotions and bonuses for the year. If the pandemic continues and the economy suffers, many schools may receive less money from donors and sponsors.

Some schools will be forced to reduce the number of scholarships given, while some schools may have to cut certain sports in general. The University of Cincinnati announced on April 14 that the men’s soccer program will be discontinued, seemingly in an effort to save money for other school projects or sports amid the COVID-19 pandemic.

Utah’s larger universities will also be affected by the revenue cuts by the NCAA, though it’s hard to tell what those implications might be. There is already conflict when it comes to BYU and scholarships for the upcoming football season. Many recruits who sign with BYU end up serving two-year LDS missions, either after their first year of play or right out of high school. But many athletes’ missions were cut short due to the pandemic. While the fates of those players hang in balance, the ultimate question is whether there will be enough funding for those who were promised scholarships for this season.

BYU is allowed 85 scholarships for its football team every season and there are 74 returning scholarship players from 2020. Of the 29 recruits, 12 plan on playing in 2020 under scholarship, including Utah-transfer Devonta’e Henry-Cole and high school All-American wide receiver Kody Epps. That’s 86 scholarships, which is past the number allotted by the NCAA.

The Cougars also have five returned missionaries expected to play in 2020: Tanner Baker, Ben Tuipulotu, Campbell Barrington, Connor Pay and Tysen Lewis. BYU is already looking at 91 total scholarships, and that’s without adding any of the players that came off of missions early. With many schools already adjusting programs and preparing to cut scholarships, BYU football will have to make some very difficult decisions.

The BYU football team gathers together at the end of the fifth day of Spring Practice. (Preston Crawley)

There’s also a lot unknown about how BYU, Utah State and Utah will handle the financial impact of letting their spring sport seniors return for another year. The University of Wisconsin is well-known across college sports, especially in its football and basketball programs. But the school decided not to allow spring seniors to return for another year, despite appearing to have plenty of money from its programs.

According to numbers from the Equity in Athletics data, most of the teams at BYU use up what little money they’re given, with the main exception being football. 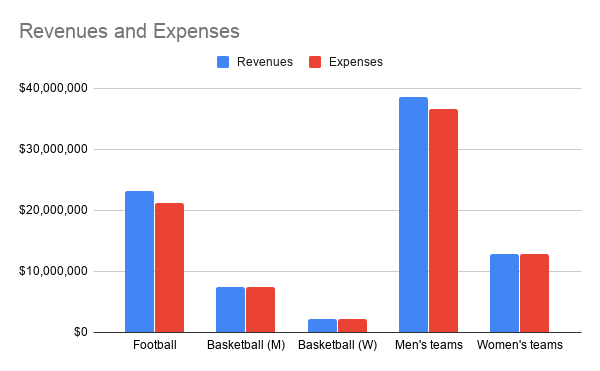 Revenue and expenses for BYU sports in 2018, according to information from the Equity in Athletics Data Analysis. (Sydney Fleming)

Another potential effect of the revenue cut could have to do with recruiting. All NCAA coaches are currently under an in-person recruiting ban that was first established on Mar. 13 and extended through May 31 at the beginning of April. No recruiting also means that showcases and camps that were supposed to be held will be canceled.

When the NCAA does allow coaches to continue recruiting in the traditional manner, it likely won’t be the same. In an interview with The Philadelphia Inquirer, Villanova sociology professor Rick Eckstein, who has written books about how sports stadiums have been funded, had a fair warning for the coaches.

“Depending on how long it lasts, the big-time programs may face the prospects of paying for bloated athletic budgets with depressed revenues,” Eckstein said. “I’m not sure this is purely economic, but with the youth sport pipelines all but shut down, it’s going to be harder for schools to recruit in the traditional manner.”

While the recruiting process for many has come to a screeching halt, coaches still have other ways to contact recruits and keep up communication. BYU Football media relations director Brett Pyne said although communicating through phone calls and texts isn’t the preferred manner of contacting recruits, every coach is currently in the same boat and will have to make do. For many schools with limited budgets, video conferencing and phone calls might become more common in the future.

Also affected by the recruiting ban is the BYU men’s basketball team, which finished its season early due to the pandemic. Assistant coach Chris Burgess discussed how the coaches have adapted.

“We have to get really creative — with our videos, with the way we try to sell our program, sell our university, sell our academics, sell our resources and nutrition and strength and conditioning, the way we travel and our conference,” Burgess said. “Everything has been little videos here and there of BYU. It’s the best we can do. I don’t like it, but I don’t think anybody does. You just gotta take the cards you’re dealt and do the best you can.”

The NCAA’s revenue cut is expected to impact college sports across America, from top universities like Wisconsin down to smaller universities like Southern Utah, which is already feeling the impact of the cut. As long as COVID-19 is rampant, colleges can expect things to get worse before they go back to normal.

sportsline / MMA UFC Fight Night: Red-hot MMA analyst reveals selections for Saturday’s… SportsLine’s Kyle Marley is up nearly $21,000 in the past 16 months with his MMA selections and nailed 14 straight main events. He just released his predictions for UFC Fight Night: Figueiredo vs. Benavidez on Saturday. Continue reading from the Source