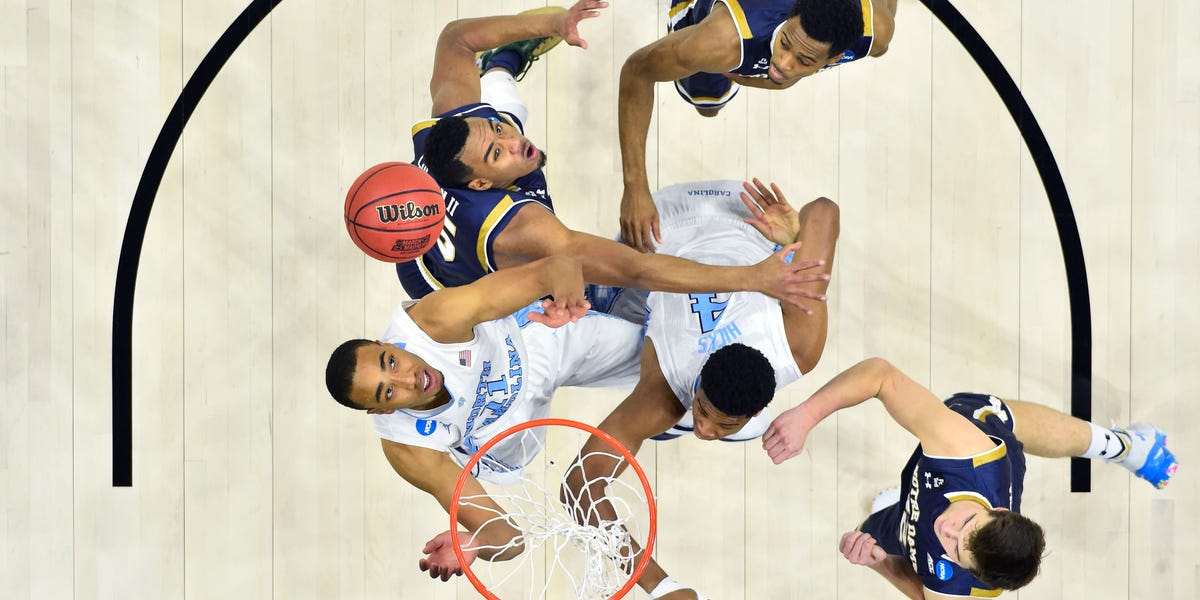 Following is a transcript of the video:

Narrator: In the 2016-2017 school year, NCAA revenue reached $1 billion. Many people have argued that the players who drive this revenue don’t receive the true value that they bring to their schools.

John Oliver: There is nothing inherently wrong with a sporting tournament making huge amounts of money, but there is something slightly troubling about a billion-dollar sports enterprise where the athletes are not paid a penny.

Narrator: John has a point. So why is it that student-athletes aren’t paid? Let’s start by looking through recent lawsuits against the NCAA. In response to the release of EA Sports’ popular NCAA video games, former UCLA basketball player Ed O’Bannon filed a federal lawsuit against the NCAA over whether Division I men’s basketball and football players should be compensated for the commercial use of their names, images, and likenesses.

After appeals, the final outcome was that even though the NCAA’s amateurism rules are unlawful, the fact that it lets colleges compensate student-athletes with the cost of college attendance, the NCAA frees itself from antitrust violations. And in March 2019, there was a slight change to that ruling.

In the US District Court, Judge Claudia Wilken ruled to allow each conference and its member schools to provide additional education-related benefits without NCAA caps and prohibitions. Her ruling tethers payment to education, so instead of cash, student-athletes will be allowed to receive computers or scholarships for post-graduate degrees.

In each trial, the NCAA has argued that amateurism keeps it from becoming an anticompetitive trust. So what is amateurism?

In page four of the NCAA Division I handbook under the heading “The Principle of Amateurism,” the NCAA declares student-athletes shall be amateurs in an intercollegiate sport, and their participation should be motivated primarily by education and by the physical, mental, and social benefits to be derived.

To clarify that, Oliver Luck, the NCAA’s former executive vice president of regulatory affairs, said in a speech in 2015, “It would be a bad mistake to create campus employer-employee relationships with student-athletes.” Paying college athletes “would distract in a very significant way from pursuing what they really need to pursue – an education… And we need to emphasize the value of that education.”

But let’s think about that for a second. Are student-athletes able to receive the full value of that education?

Richard Sherman: No, I don’t think college athletes are given enough time to really take advantage of the free education that they’re given.

Narrator: Former student-athletes argue that the time commitment of playing a college sport, especially at the Division I level, impedes their ability to take advantage of their educational opportunity.

Sherman: Show me how you’re gonna get all your work done when after you get out at 7:30 or so you got a test the next day, you’re dead tired from practice, and you still have to study just as hard as everybody else every day and get all of the same work done.

Narrator: In fact, CBS Sports published a study on the topic with data from the Pac-12, the league Sherman competed in while at Stanford. The study surveyed 409 Pac-12 student-athletes and found 54% of athletes say they don’t have enough time to study for tests, 80% of athletes say they have missed a class for competition during the academic year, and overall, athletes spend 50 hours a week on athletics. And while student-athletes feel they have the resources at their disposal to succeed academically, they don’t have the time to do so.

Reporter: The University of North Carolina today reeling from a blow, a really big blow, to its reputation, especially the integrity of its legendary sports program.

Narrator: The University of North Carolina even went as far as committing academic fraud for 18 years. Advisers enrolled students in paper classes, which were fake classes used to inflate student-athlete GPAs to keep them eligible to play. So in many cases, these student-athletes are not receiving the education they’re promised, the cost of which is by law how they’re compensated.

But beyond that, the cost of that education is lower than the revenue most big school athletic departments bring in. In 2014, the 10 schools that made the most money in college sports averaged revenue that was $132.5 million more than the average those schools spent on scholarships.

Skip Bayless: So you get a free ride at school, but you deserve so much more than that.

Narrator: In her latest ruling, Judge Wilken denied a free market scholarship model, and the idea of paying student-athletes raises a lot of questions.

Scott Davis: There would be such a large disparity between some of the athletes, and it’s no different than the pros where the best players are getting paid and lower players are not, even when you trickle down to other sports that are not making as much money or generating as much attention as football or basketball.

Bernard Muir: We have 36 sports, many of the sports you’ve just mentioned. We would have to kind of concentrate to a small number in order to pay student-athletes.

Davis: There would be less incentive to go to class because they would essentially have a job already if they were earning, like, their true value to the schools.

Narrator: Despite these arguments, some writers have devised plans to pay athletes the value they add to their schools. Deadspin published, “So what is the best plan for playing players? No plan at all,” arguing to treat them like any other employee and that the free market is the best solution, similar to the proposal in Judge Wilken’s court.

SB Nation suggests the NCAA adopts the Olympic model of amateurism in which the athletes are free to gain endorsement deals and sell autographs. And LZ Granderson has called for government intervention.

Granderson: It is way more complicated than just handing out checks, as well, and so I think Congress actually needs to get involved a lot more than what’s happening right now.

Narrator: This issue is far from decided and likely won’t be anytime soon. Let us know what you think in the comments. Do you believe college athletes deserve to be paid? If you do, what model do you think works best?

sportsline / MMA UFC Fight Night: Red-hot MMA analyst reveals selections for Saturday’s… SportsLine’s Kyle Marley is up nearly $21,000 in the past 16 months with his MMA selections and nailed 14 straight main events. He just released his predictions for UFC Fight Night: Figueiredo vs. Benavidez on Saturday. Continue reading from the Source